During the last month I posted 4 day trading setups in the telegram group in real-time. All 4 trades ended as winners and produced, with my intraday targets, 7R profit (1R = the initial risk).

These 4 trades are only those trades which I posted live. In July were around 20 highest probability setups which you could select.

Since December I posted around 30 live trades in the telegram group. You can count the trades which ended as losing trades on one hand. You can check all trades by scrolling back and learn from my explanations.

Learning from these setups will give you the conviction that the Double Top/Bottom concept is all you need to get profitable.

I already explained the first of the 4 trades in the previous blog post.

Now I will explain my thoughts and reasons for the other 3 day trades.

The second live trade in July was a double bottom on GBPUSD on M30 in direction of a V-formation on H4. Here you can see the signal time frame M30: 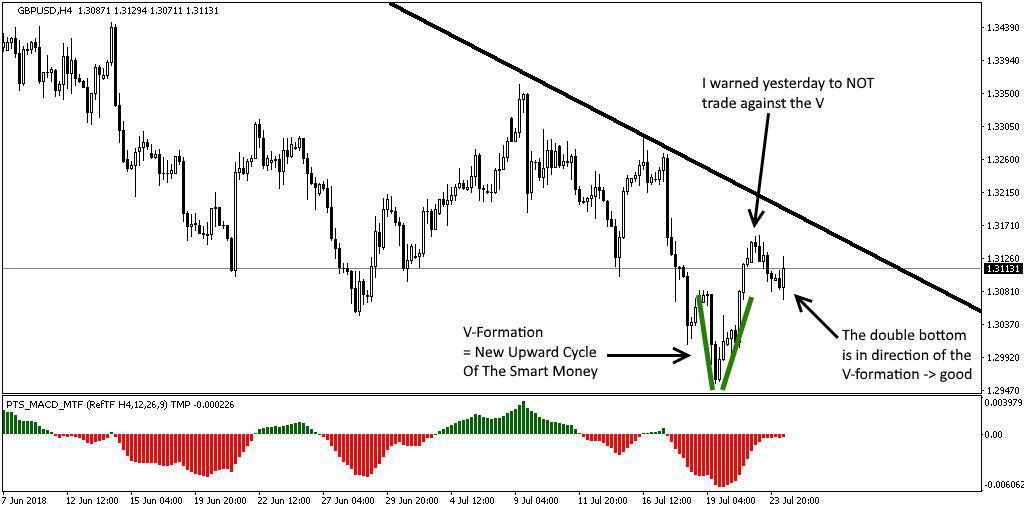 In the following screenshot you can see a part my real-time messages in the telegram group: 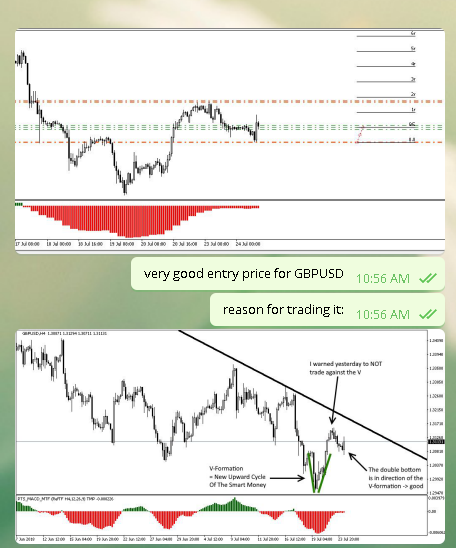 The next screenshot shows my profit taking at around 1.6 R. I'm an intraday trader and love to exit on the same day. Therefore, this resistance area at the high of the previous day was a good profit target: 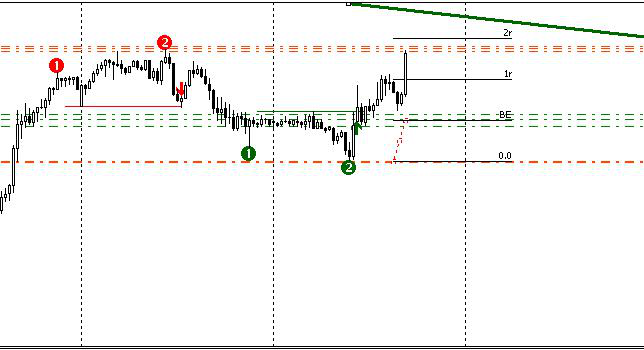 There was room to the upside until the big descending trend line of the downward trend was reached. Many traders of the telegram group hold the trade over night. They were rewarded with a 2.3 R winner:

A few members of the group took the double top on GBPUSD on the day before the double bottom occurred (the second trade above). I explained that if you enter this double top at the neckline then the risk / reward of the trade is not good. This signal had not a big profit potential because it was against the direction of the bullish V on H4.

As you can see in the following screenshot this signal even didn't read 1R: 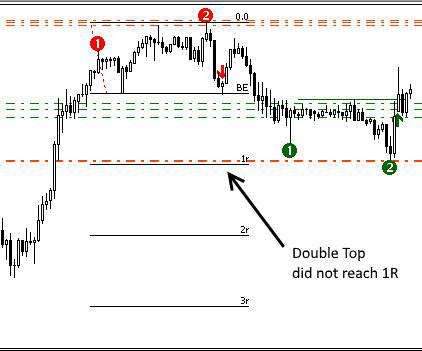 In the next screenshot you can see the same double top signal. I explained that the same signal was a very good signal after the price made a very deep pullback although it was against the bullish V. This is because of the very good risk / reward of the trade. Would you enter after such a deep pullback then the same small downward move after the signal could produce a 6 R winning trade, as you can see in the following screenshot:

One day later traded this concept "waiting for a pullback to transform a bad signal into a good signal" live in the telegram group. There was a double bottom on EURGBP on M30. There was no support from the bigger picture for this signal. We would never enter such signals directly at the neckline. But after a pullback of 50% (to the middle between the neckline and the lowest low of the double bottom) the signal had now a very good risk / reward and was a tradeable signal.

It was still not an extremely good signal but it was now a signal with a good edge. The trend channel (resistance) was far enough away to give a big enough move to the upside.

Here you can see a part of my real-time messages in the telegram group:

The profit target was reached. It got a 1.6R winner:

Later you could see the the trend channel rejected the price:

The fourth trade was a double bottom on USDCHF M30. The signal was especially good because it was within a bullish divergence during a downward trend and the space / room to the next descending trend line (resistance) was far enough away to give a big profit move:

Here you can see a part of my real-time messages in the telegram channel: 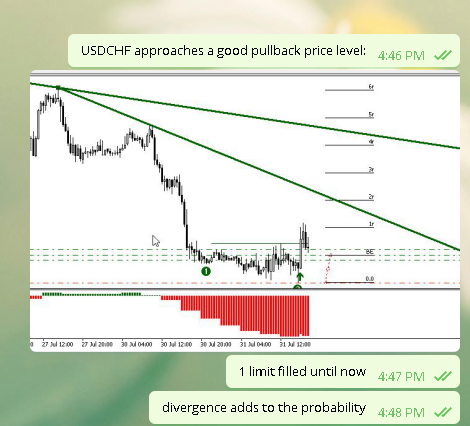 Here you can see the signal in relation to the bullish divergence:

Because I love to exit on the same day I was satisfied with a 0.8 R winner: 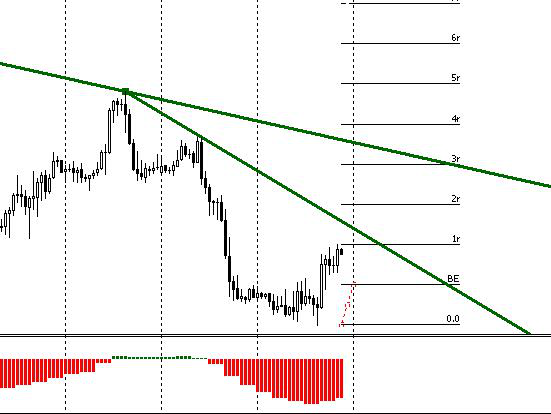 The edge of the bigger picture (the bullish divergence) helped to move the price on the second day even higher. A 2.5 R winner was possible:

You can receive these signals in real-time with the telegram signal service or if you run the alerter indicator on your own computer.

Also, please join the free telegram group and learn from experienced traders there.